A Different Kind of Harvest – This Way Gourmet 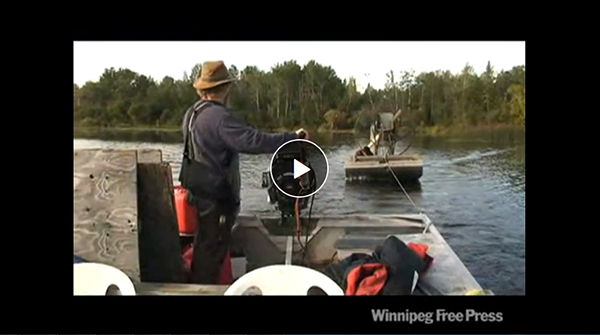 NEAR THE PAS — “Nice day for ricing,” says Rick Atkins, smiling as he climbs atop the bow of the barge for a better view as it plugs across Lake Kapiskwu­tunuskot.

Skimming through patches of reeds and water lilies under a bright Septem­ber sky, the flat-bottomed boat glides on slowly to the more remote Lake Apeki­sayakamak — dubbed Lake 36 by Rick and his nephew, Tony Atkins, who’ve given up trying to pronounce either lake’s name.

After unloading Rick onto a pontoon boat stored overnight in a reedy creek, Tony motors on to Apekisayakamak, a wide, calm lake with tall pines and shallow outcroppings of limestone along the shore.

Rick zips ahead on the tall pontoon boat, donning a protective headset to block out the roar of its motor. The boat nearly disappears into a marsh of green and tan wild rice stalks, buzzing back like an oversized water bug with a hop­per full of freshly picked rice.

If the weather holds, the Atkinses will wrap up their harvest in one more day.

They’ll have collected close to 23,000 kilograms of naturally organic wild rice this season, harvested over three weeks on half a dozen secluded northern lakes, and destined for stores and dinner tables that feel like a world away.

Harvesters call it ricing, or picking, but the latter is a bit of a misnomer.

Flick a stalk of ripe rice with your finger and tan and purple kernels will shower onto your lap, no picking required.

Air boats, one of which the Atkinses use on smaller lakes, harvest wild rice in much the same way. The boats can skim over the shallow water necessary for good rice crops, allowing the stems of rice to slap against a shallow hopper and releasing the seeds inside.

It’s an even smoother system with a pricier pontoon boat, an almost gan­gly machine that lets the stems pass unscathed between two flotation tubes after the grains of rice are shaken off.

After seven years of working togeth­er, Tony and Rick have learned a few things about harvesting a finicky crop that ranges from bountiful to abysmal.

It’s a specialized knowledge: wild rice may be a celebrity of regional cuisine and a staple souvenir for gourmand tourists, but many Manitobans have only the vaguest notion of how and where it grows.

Ricing isn’t the sort of roadside farm­ing most Winnipeggers see outside city limits. There’s not even road access at remote Lake 36.

Wild rice does grow naturally in the province, but mainly in the Whiteshell area, where it was a dietary staple for the Ojibway people and traditionally harvested with canoes and rice sticks.

(Hand-picking still happens on some lakes, but it’s no longer the norm.) The rice didn’t take to the north on its own, and it took numerous seeding attempts and a government air-seeding in the 1980s to turn the area into one of the province’s top rice regions.

Today, the region around The Pas and Flin Flon draws white and aboriginal pickers, with about 30 to 40 people head­ing onto their lakes in late August and early September.

Most sell to bulk buyers, but the Atkinses market their rice independ­ently. Tony came up with the company’s name, Wild Man Ricing, and the ruddy­faced 37-year-old with hip-waders over his overalls and a thick red beard hang­ing past his chin is clearly the wild man of the duo.

Few rely on wild rice as their sole source of income, and although the Atkinses have a mid-sized operation, they don’t either. Rick is on the brink of a postponed retirement — the former Manitoba Hydro worker bought the A&W in The Pas a few years ago — and Tony takes a few weeks off work in Winnipeg every year to bring in the harvest.

“It’s just about as independent a business as you can get,” says Rick.

“Your success depends on yourself, and Mother Nature, of course.”

As farming goes, a patch of wild rice is a long way from a wheat field. There are none of the usual input costs, as wild rice reseeds itself annually and no fertilizer or pesticides are needed.

Fuel costs add up, and organic cer­tification can cost $700 or $800. But the biggest expenses are equipment and lake leases, which can run in the tens of thousands of dollars.

With such an unreliable crop, the At­kinses are relieved this year’s harvest is shaping up to be a good one.

“We’ve just ended the three worst years on record,” says Rick, recalling last year’s scant harvest of about 2,700 kg. “This year, for most growers, is a good year.”

Peel open the husk of a wild rice ker­nel and you’ll find a slender seed, either soft and vividly green or more crisp and brown, snapping open to reveal a milky white interior.

The seeds that wind up on super­market shelves are a glossy black, and getting them in the right condition requires a com­plex series of steps with a simple goal: dehydrating the rice and getting rid of husks and other debris.

Rice cures in large piles at the Wildly Canadian plant in The Pas, where some local pickers have their rice processed.

Staff turn the nutty­smelling eep them nd after piles regularly and keep wet to prevent over-heating, and four or five days the rice is moved to a row of metal barrels, where it’s heated up to 105 C.

“When you crack it, it looks like glass,” says rice cooker Dennis Fidler, his face dripping sweat from the steam. “You bite it and it shatters.”

The rice moves on to a series of hoppers and tanks, where it’s parched, shaken and cleaned of debris.

The finished product is sorted by grade, some of it destined for high-end sales and some ground into rice flour.

Like the Atkinses, Wildly Canadian owner Les Tabachak is keen to find a bigger market at home and overseas. He’s working on developing instant wild rice, and with his rice already on sale at The Pas IGA, hopes to make inroads at more grocery chains.

But trying to market­ing the finished product as Manitoban — and wild — can be a head­ache, say the Atkinses.

That’s because what customers know as wild rice isn’t always grown wild, and most of what’s sold is cultivated in rice paddies in California. The 9 to 22 million kg produced annually in that state dwarfs the 1.3 to 2.3 million kg harvested in northern Manitoba and Saskatchewan, says Rick.

The sky is overcast and a wind pick­ing up as Rick heads in after his last round. After eight hours, the barge is loaded down with around 50 bags of rice, worth about $3,125.

Rick takes the pontoon boat and begins the long trek back to shore, and Robbie Cohoe, hired to help with the harvest, buzzes off alone on an air boat he spent part of the morning repairing as it was pulled behind the barge.

Tony steers the barge homeward, and after reaching Kapiskwutunuskot he picks up a handful of old rice kernels from the bottom of the boat, casting them into the water.

It’s a ricer’s version of spring seeding, an unreliable but low-risk act of faith. There’s always the chance the rice will take root, that weather and water levels and other mysterious factors will conspire to produce a healthy crop.

“That’s how it starts,” says Tony, tossing another fistful into the water.